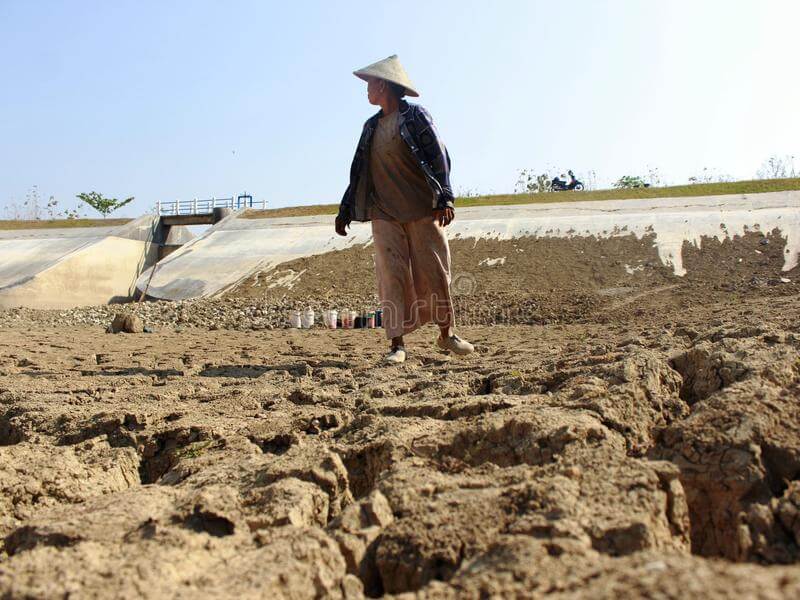 Amsterdam, June 29th 2022– Indonesia’s dry season has never been easy. Dry winds blow from Australia and rainfall is almost nonexistent, which leads to major forest fires, choking air pollution, and searing heat, along with the energy-sapping effect the season has on residents.

For many parts of Indonesia, one problem has become increasingly frequent: drought. Indonesia’s Agency for Meteorology, Climatology, and Geophysics (BMKG) has warned that severe drought could be felt in seven of the country’s provinces, with second-level drought in many more, including Jakarta. By July, 55 districts and cities had already begun implementing emergency responses to water shortages.

The vast majority of Indonesia’s water usage (70%) goes to agriculture, with less than 10% for domestic, municipal, or industrial purposes. Most agricultural water supplies come from rainwater, and irrigation remains limited and of a quality ready for improvement. And it is often poorly maintained.

The result is that dry seasons strike farmers particularly hard.

Ironically, Indonesia as a whole has a surplus of water, but most of it is located on less populated islands such as Kalimantan and Papua. Papua, for example, has 70% of Indonesia’s water supplies but just 13% of the population. For obvious reasons, redistributing water from one island to another is virtually impossible, so that each island must be looked at separately.

Millions of people living on Java have been struggling for years to access water during the dry season.

In 2017, wells and rivers dried up across parts of Central Java, including crucial rainwater reservoirs for village water supplies. People were forced to purchase water from delivery trucks, leading to massive price spikes. The Jakarta Post reported that 5,000 litres of water usually cost around IDR 100,000 (AU$10) but leapt to IDR 300,000 (AU$30) in September 2017 due to increased demand. Households were spending up to IDR 1,000,000 (AU$100) on water per month during the worst of the season.

Similar problems were felt in September 2018, with governments delivering 30 million litres of water across Java to parched villages.

Java’s water shortage is entirely man-made. Climate change is leading to longer and drier dry seasons, and shorter but wetter wet seasons, creating havoc for water supplies, rice production, and livestock. Increased urbanisation, environmental degradation, and more agriculture have also made it harder to capture and store rainwater, so that when rain does arrive, most of it simply becomes runoff, flowing into rivers and even causing floods, instead of being stored for future use.

To make things worse, Java’s rivers are heavily polluted and unsuitable for anything more than livestock and irrigation. Just four of Java’s 44 large rivers meet standards known as Class 2 – suitable for water recreation, but not for drinking – all year round, and several are laden with silt caused by erosion and agriculture.

The Ciliwung River, which flows through West Java and Jakarta, doesn’t even meet Class 4 standards, meaning it is suitable only for irrigation. Almost half of Jakarta’s groundwater is contaminated by fecal matter, while 80% contains e. coli – major causes of potentially fatal diarrhoeal illnesses such as typhoid. An outbreak in July of hepatitis A that affected more than 1100 people in Pacitan, East Java was blamed on poor water, sanitation, and hygiene, and followed on from similar outbreaks in the same district in 2013 and 2014.

While there is no quick fix, there are sustainable measures that would help alleviate the impacts of drought. Building more reservoirs is one possible answer – indeed, 26 new reservoirs are planned for completion in Java this year – but the focus should also be on improving existing supplies. Rivers and groundwater are heavily polluted across Java, and with just 20% of the country’s population using piped water, local sources must be cleaned up and improved if the island is to avoid running out of usable water. Homeowners should also be supported to move from bores and wells to piped water, and to understand the important effect it has on environmental sustainability.

In addition, Indonesia must shift towards less water-intensive crops and livestock. The production of rice, the country’s primary staple, consumes a massive amount of water, yet farmers around the country – even in drought-prone areas – are encouraged to increase rice production to achieve self-sufficiency. To do so without increasing the burden on water supplies, irrigation needs to be dramatically improved. Crops more suitable to dry regions, such as cassava and sweet potato, should also be better supported. A number of local initiatives have already popped up across the country that urge residents to eat traditional crops, such as those in Eastern Indonesia that celebrate sago porridge and steamed cassava.

Finally, residents themselves should become involved with pushing for change. A recent BBC Indonesia video saw social media users react in shock when Java’s water shortage was highlighted, with one commenter on YouTube remarking, “This video has completely opened my eyes. I never worried about water because I assumed that as long as I paid for it, it was my right to use it. But it turns out, it’s not that simple.”

With more awareness, Java’s residents might just be able to convince the government to act before it is too late.